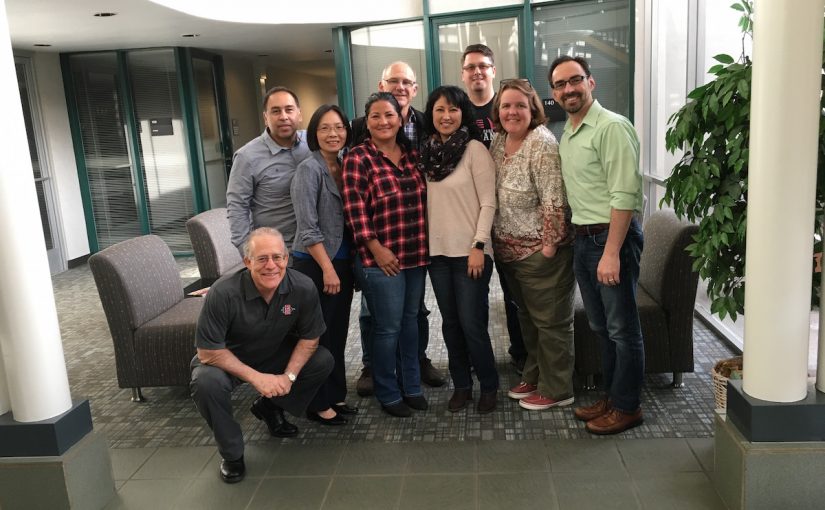 Dr. Osvaldo Soto is DMPC’s director and an Adjunct Professor at the Center for Research in Mathematics Education (CRMSE). Dr. Soto is interested in the development of secondary teachers’ proof schemes and how teachers draw on their proof schemes to guide instruction. He brings nearly two decades of secondary teaching experience and 8 years of research-based professional development experience.

Trang Vu is DMPC’s assistant director. Before joining the project, Mrs. Vu was a Math for America San Diego Noyce Master Teaching Fellow. She is also the Museum of Math’s 2013 Rosenthal Prize winner for Innovation and Inspiration in Math Teaching. In DMPC, Mrs. Vu helps direct the project in nearly all aspects, including being lead curriculum writer of the curriculum. She loves teaching.

Co-PI William Zahner (Assistant Professor of Mathematics and Statistics, SDSU) is a mathematics educator whose uses a sociocultural approach to learning to research how students learn important algebraic concepts though participating in mathematical discussions. Zahner’s recent work has combined tools from discourse analysis and mathematics education research to explore the affordances of classroom discussions in linguistically diverse mathematics classrooms where some students are classified as English Learners. As a graduate student at UC Santa Cruz, where he received his Ph.D. in 2011, Zahner was supported by a fellowship from the National Science Foundation funded Center for the Mathematics Education of Latinos/as. He also has six years of experience as a secondary mathematics teacher, including three years in Chuuk, Federated States of Micronesia.

Co-PI Randolph Philipp (Professor of Mathematics Eduation, SDSU, and Director of CRMSE) grew up in the San Fernando Valley in California, where he earned a degree in mathematics and then a fifth year single-subject teaching credential in mathematics. He worked his way through college “busting tires” at Sears, and in his spare time taught CPR courses for the American National Red Cross and served as a Big Brother of Greater Los Angeles. He spent the next two years as a Peace Corps Volunteer teaching mathematics at a junior high school and in a teacher training institute in Liberia, West Africa, where, while out for a run one afternoon in the bush, he decided he enjoyed working with prospective teachers even though he did not know what he was doing. He decided then to pursue a graduate degree in mathematics education. He returned to the U.S. and taught mathematics in an inner-city Los Angeles high school and then in Canyon Country, north of Los Angeles. While teaching, he worked on an M.S. degree in mathematics at night and also served on a crisis intervention help-line. Upon finishing his M.S. degree, he married, moved to Wisconsin, and studied for his doctorate under the direction of Tom Carpenter.